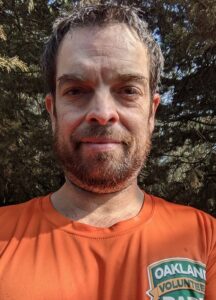 Stan Dodson, past manager of La Farine Bakery in Oakland (2003–2021), and founder of the nonprofit organization Oakland Trails, has worked to promote, maintain, and enhance the trail system that connects Dimond Park to the Bay Area Ridge Trail since 2008. Stan has provided leadership for community involvement up and down the hill, including producing the documentaries Trailhead (2015) and Old Survivor (2018), co-founding and managing Oakland Volunteer Park Patrol, offering free hiking tours, and leading trail maintenance and enhancement projects in Oakland’s wildland parks. Through these efforts, Stan strives to inspire outdoor recreation and park stewardship while shining a bright light on the City of Oakland.

Stan is a graduate of the Oakland Citizens Police Academy, has received three Local Hero awards from City of Oakland Councilmembers, and in 2014, La Farine was honored with a “Small Business of the Year” award from Oakland’s Mayor and City Council.

In 2017, Stan received the Parkland Steward Award from Oakland Public Works, and the Anne Woodell Community Award, Oakland’s highest honor for community service in parks. And in 2018, he was recognized with a San Francisco Bay Area Jefferson Award.

While still overseeing Oakland Trails from afar, Stan is currently living full-time at his home in Tuolumne County and is a full-time student at Columbia College in Sonora studying Forestry and GIS.