In the 1850’s, fueled by the California Gold Rush, an ancient redwood forest was drastically logged to help build San Francisco. Yet one old tree was left behind.

This 20-minute documentary highlights “Old Survivor”, the only remaining old-growth redwood in the East Bay hills, and tells the story of Oakland’s resilient, ecologically amazing, and now protected redwood forest.

‘Old Survivor’ (2018) is a documentary film project of Oakland Trails

The World Premiere was a free event for Oakland Trails members and special guests, and simultaneously served as Save the Redwood League’s Centennial Celebration in Oakland. Held at the Chabot Space & Science Center on the evening of Tuesday, October 9, 2018, partners and community groups participated in the reception. We hosted 800 attendees over the course of the evening. 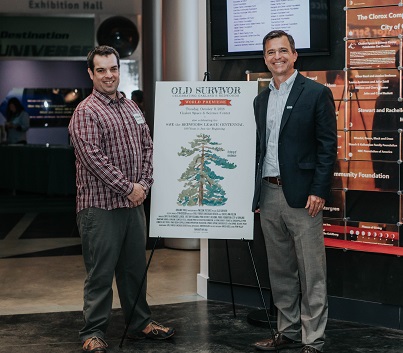 What people are saying about Old Survivor:

“Thank you, Stan, for your gift to Oakland.”
–City of Oakland Mayor Libby Schaaf

“The Old Survivor film is a terrific story with many heroes, from the nonprofit partners and public agencies that steward our parks to the redwoods themselves.”
–Sam Hodder, President & CEO, Save the Redwoods League

“Congratulations on a fantastic premiere and wonderful film. I purchased a thumb drive to send to my grandson in Switzerland. It will remind him of his hikes with me in the redwoods.”
–Brian S., Oakland resident

“Thank you for masterminding the formula for success and inviting us all along for the ride…truly a prideful night for Oakland.”
–Patty C., Premiere Event Volunteer 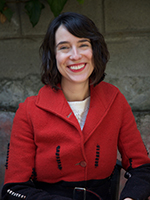 Emily Fraser – Co-Director/Producer, Cinematography
Emily Fraser is a documentary filmmaker committed to finding the poetry in the every day while provoking cultural change around pressing social and environmental issues. Her work has been shown at Doc NYC, Big Sky Documentary Film Festival, the International Wildlife Film Festival, and LUNAFEST, among others. Emily works as a freelance director and cinematographer, and as a lecturer on film production, history, and theory at Santa Clara University. In a previous life, she worked as an environmental consultant, focusing on projects in conservation, resource management, and alternative energy. Emily holds a bachelor’s degree in environmental policy and art/architecture from the College of William and Mary and an MFA in Documentary Film and Video from Stanford University. Website 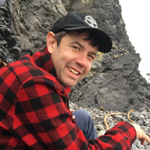 Nicholas Berger – Co-Director/Producer, Cinematography
Nicholas Berger is a documentary filmmaker whose films have aired on PBS, been nominated for two Student Academy Awards, and have been shown in film festivals around the world including IDFA, Edinburgh International Film Festival, Silverdocs, Palm Springs Shorts Fest, and Ann Arbor Film Festival. Nicholas has worked on all aspects of filmmaking from producing and directing to shooting and editing and has worked on films for the History Channel, Discovery, CNN and PBS. He is also the co-author of two children’s books on filmmaking for Klutz Press. Nicholas holds a bachelor’s degree in philosophy from Brown University and an MFA in Documentary Film and Video from Stanford University. Website

Antosh Gazel – Timelapse Photography
Antosh Gazel is an Oakland based filmmaker originally from England. He fell in love with the Bay Area as soon as he arrived here, and has a passion for the wildlife and landscape of California that he hopes to show in his work. He has been the cinematographer for Cinemasports film submissions on 2 occasions, both shown at the Mill Valley Film Festival. He works with local non-profits on time lapse, short films and documentaries, and on personal filmmaking projects. Website

Ryan Malloy – Editor
Ryan Malloy is a documentary filmmaker based in San Francisco, CA. He is interested in framing the stories of urban landscapes and the people who find their way in them. His documentary pursuits are enriched by his years of work as an urban planner. He hopes to bring focus to the spontaneous ways people interact with the built environment and the effects of urban policies on their lives. Ryan has worked in both production and post-production roles on a wide variety of documentary and client projects. His own short documentary films have screened in festivals around the world and have won several awards. Ryan is a graduate of Wesleyan University and holds a master’s degree in urban planning from the University of Michigan and an M.F.A. in Documentary Film and Video from Stanford University. Website

Stan Dodson, past manager of La Farine Bakery in Oakland (2003–2021), and founder of the nonprofit organization Oakland Trails, has worked to promote, maintain, and enhance the trail system that connects Dimond Park to the Bay Area Ridge Trail since 2008. Stan has provided leadership for community involvement up and down the hill, including producing the documentaries Trailhead (2015) and Old Survivor (2018), co-founding and managing Oakland Volunteer Park Patrol, offering free hiking tours, and leading trail maintenance and enhancement projects in Oakland’s wildland parks. Through these efforts, Stan strives to inspire outdoor recreation and park stewardship while shining a bright light on the City of Oakland.

Stan is a graduate of the Oakland Citizens Police Academy, has received three Local Hero awards from City of Oakland Councilmembers, and in 2014, La Farine was honored with a “Small Business of the Year” award from Oakland’s Mayor and City Council.

In 2017, Stan received the Parkland Steward Award from Oakland Public Works, and the Anne Woodell Community Award, Oakland’s highest honor for community service in parks. And in 2018, he was recognized with a San Francisco Bay Area Jefferson Award.

While still overseeing Oakland Trails from afar, Stan is currently living full-time at his home in Tuolumne County and is a full-time student at Columbia College in Sonora studying Forestry and GIS.