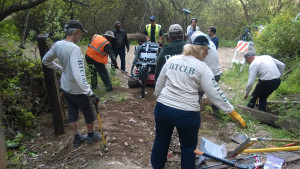 Today was a long but exciting day of filming! First, we captured a trail improvement project performed by the Bicycle Trails Council of the East Bay for Cinderella Creek and park users on the Sunset Trail. Background: In the summer of 2013, the very steep bottom section of Cinderella Trail in Joaquin Miller Park was rerouted to eliminate a dangerous trail intersection and to control erosion in the watershed. It was a massive project that included several groups – Friends of Joaquin Miller Park, Volunteers for Outdoor California (V-O-Cal), Bicycle Trail Council of the East Bay, Oakland Parks & Recreation, and Oakland Public Works. A new 1/3 mile of trail was designed and constructed, while the old, over grade trail was closed off.

Last November, park stewards noticed that the barriers had been removed by other park users, and this problem section of trail was once again being used. Public Works was notified, and a collaboration of volunteers and city staff got together and planned an immediate fix. Today, we filmed the workday from that collaboration. 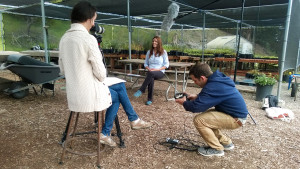 Then, we packed up the gear from deep in the park and headed to Friends of Sausal Creek’s native plant nursery. There, we interviewed Michelle Krieg, FOSC’s Restoration and Nursery Manager. She did an amazing job in a beautiful setting.